Hello!! Wow what a week it has been!

On Tuesday after district meeting, we hopped on a train and rode 2 1/2 hours to vorbei some less actives in our ward! There were about four or five we planned to go by, but we called two of them and they weren't home, and the other one said we should come back Sunday afternoon which would be better for them. So we ended up just going by to see one lady, and it was a miracle that we did because she has a new address and a new phone number!  She said that she was pretty busy, but maybe in the future she would love to meet with us :)  As we were heading home, we looked at our map and realized that we were only ten minutes away from LEGOLAND DEUTSCHLAND. OMG!  So natürlich we hopped on a bus to check it out.  It was pretty cool from the outside :)  It was a fun little day trip, and we talked to some very nice people along the way! 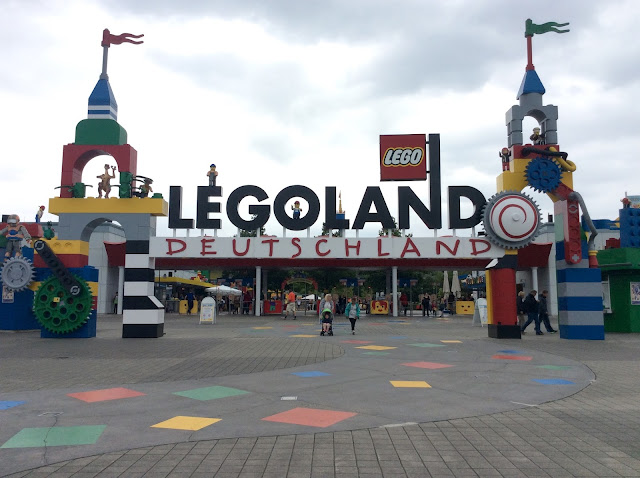 Wednesday we had another awkward service project at our little less active family's house, then we had an appointment with Stanley!  We taught him the Plan of Salvation and it went pretty well because he's pretty spongey :) Thursday we went back to our awkward little less active family to help them with some more stuff, and we decided not to go over anymore because they really just don't want to change or to be helped spiritually. Which is sad, but maybe in a couple years their hearts will be softened.  After that we went to the church and did a POKEMON GO AUSSTELLUNG. (I have no idea what ausstellung is in English sorry) but holy crap! it was so funny. So we have found out recently that our church is a Pokemon Go stop! Don't ask me what Pokemon Go is, because I have no idea. I just know that it means that clumps of people are always stopped and staring at their phones in front of the church, because our church is right in the middle of the city, and so obviously we are gonna hop on this opportunity and talk to all these people! So we set up a table and colored some Pokemon looking things, and put out some Books of Mormon and sat there waiting for our friends to stop by!  Well it wasn't quite as successful as we hoped it would be, but lots of people laughed and said it was a good idea, and we even had some guys take pictures of us! They're probably gonna put it all over Facebook or Instagram and make fun of us and I'm so excited!  WE ARE GONNA GET SO MANY PEOPLE TO STOP BY NEXT TIME! Haha we decided that as soon as we learn how to sew, we are making Pikachu costumes and marching up and down the sidewalk in them until someone commits to being baptized! #prayforus 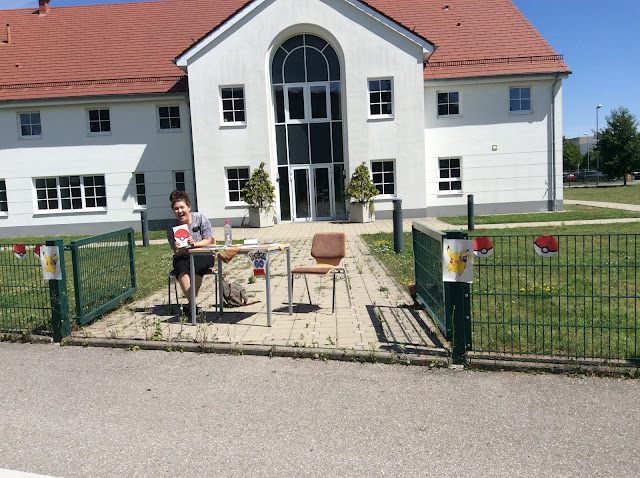 After our ausstellung we went to Herr Mach's to teach him a little more about the priesthood. We both learned a very important lesson that day! Herr Mach's wife was home, but didn't come join us for the lesson, so we were in a room alone with him (which is technically against mission rules) and holy cow the spirit was NOT there. We were expecting his wife to join us, so we stayed, but it was not the best lesson we have had with him, and now we know why we need to always be EXACTLY obedient! No matter what!

Friday night we went to the Bishop's house for dinner and his family is so cute! We played a game about the gospel of Jesus Christ and the kids loved it :) we also gave them stickers for participating and that just put it over the edge because I now have two new little best friends :) 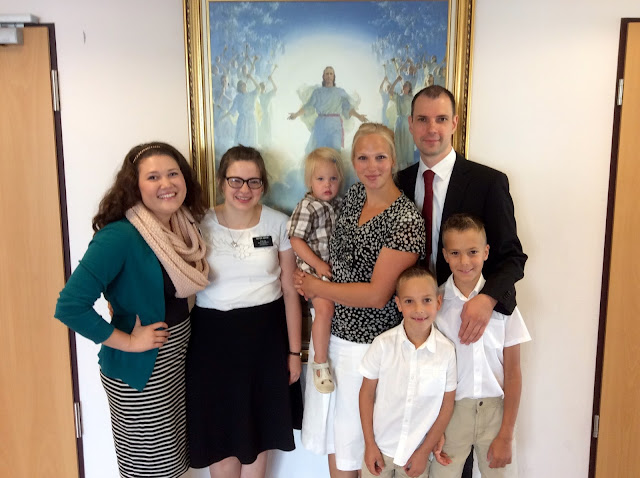 On Saturday we went to the YW leader's house for lunch and we talked a lot about how we could help the ward and the YW. It was a great appointment, and she showed us her pictures from her most recent vacation to Thailand, so now I want to go to Thailand haha :) 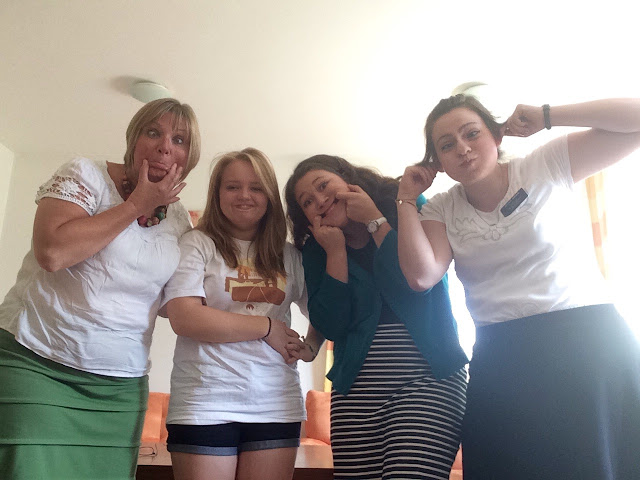 Then we had an appointment with our new little Peruvian family that only speaks Spanish! Except for the dad, he speaks German and English and Spanish. So we called right before we got there, and found out that the mom wasn't home, just the dad and the little boy and then Braulio, who just got off his mission in Argentina.  So we started panicking a little because we can't just be alone with men!  We were praying so hard that something would work out and we would be able to have a good appointment with them and get to know them and have the spirit with us!  The mom, Elizabeth, is less active and the dad, Philip, isn't a member, so it was a super important appointment!  Well, right when we walked in we suggested that maybe we could sit outside on the porch and enjoy the weather and Philip thought that was a great idea!! #PRAYERANSWERED. BOOM! Heavenly Father is so great :) We literally had the BEST appointment ever with them!  We spoke in English and then Philip translated to Braulio for us, and we tried to use our three Spanish words we knew as often as we could to try and communicate with him ourselves. (Queso, agua, and gato).  But it was so awesome :) We answered a lot of questions about the church, and set up a return appointment!  I'm so excited to get to know them better and start working to get them to church!
Sunday was the best Sacrament meeting I've ever been to in my life. We have so many Spanish speaking people in our ward now because they just keep moving in in little clumps! We might need to start a Spanish branch soon! ;) and all of them got up to bear their testimonies in Spanish on Sunday!  It was so powerful, and the only words I understood were "yo soy" and "amen" but luckily we can all understand the language of the Spirit :)  We also had a bunch of youth get up and bear their testimonies because they all just got back from FSY! (The European version of EFY) and we even had two less active youth get up and bear such powerful testimonies!  It was just amazing and Sister Abram and I just had tears in our eyes the whole time! I love this ward and I love being a missionary! After church we went to the Reichardt's, a British family, and had an awesome appointment :) Then we went back to the Legoland area and had an appointment with the less active family we tried meeting with a couple days before! They were sooo nice, but unfortunately have absolutely no interest in the church. Which is always sad :(

Today for pday we picked sunflowers!! Here in Germany they have giant fields of every type of flower you could ever want and you just cut them yourself and then put a few coins in a little container on your way out! ITS SO AWESOME. I LOVE SUNFLOWERS SO MUCH. 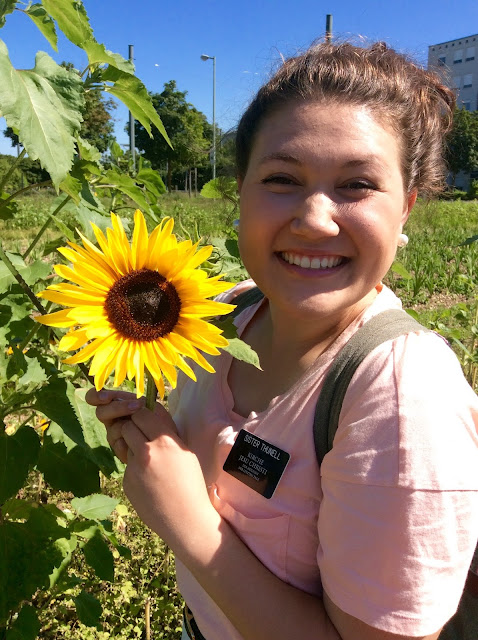 After that we went exploring in the city a little, and saw some pretty cool churches and buildings :) I don't think I'll ever get over the old beauty of these European buildings! They're just so awesome :) 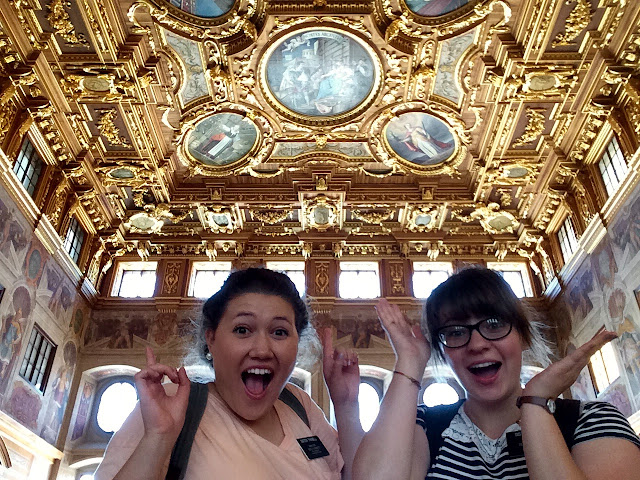 This weekend we had the opportunity to fast!  Let me tell you how much I hated fasting before my mission. I hated it. But let me tell you how much I have grown to love fasting on my mission. I LOVE IT!  Man, who needs food when you can have the POWER OF GOD with you?!  haha...But actually I still need food because I like that stuff.  Before my mission I always thought you could only fast for like one thing when you fasted!  I have quickly learned out here that fasting is more like an extra powerful, more extended prayer :)  At the beginning, when my companions would offer to a bazillion people that we could fast for them I would be like "WOAH, CHILL!  I HAVE SO MUCH TO FAST FOR ALREADY. I'M GONNA HAVE TO FAST FOR LIKE FORTY DAYS, GUYS!" But just recently I decided to make a fasting jar!  Every time we offer to fast for someone or something, or we are asked to fast for a specific reason, I write it down and put it in my fasting jar! Then right before I start my fast I can read all the things I am fasting for and remember them better during those 24 hours without food or drink :)  I seriously love fasting so much, because I have seen the BLESSINGS that come from it!  There is nothing more powerful than the faith of an imperfect being, and the grace of God to bless the faithful :)
I love you all so much!! Have a great week!