You can't even tell from the pictures...it looks like such a dumb little thing.

Megan and I were driving to the HS.  I was driving, thank goodness, or she would never have gotten behind the wheel of another car again, I don't think.  Emma has been riding to school with a friend this week.  We stopped at the signal right before Walmart on Exchange and the Jeep Cherokee behind us didn't stop.  I could see him coming up too fast behind us in the rearview mirror and I knew he was going to hit us.  Megan said I gasped, but I don't remember that. He hit us hard enough that we hit the car in front of us but when the light turned green, that guy just kept driving.

It's so weird when an accident happens that you kind of have no idea what to do for a few  minutes.  So I just turned on my hazard lights and sat there in the middle of three lanes of traffic, oblivious to all the other drivers who were probably super irritated that we were holding them up.

I tried to think of who to call and I could only think of 911, but that didn't seem right because no one was bleeding.  So I called Craig.  He was in the middle of a meeting in Orlando.
I eventually returned to my senses and pulled us off into the nearby hospital parking lot and the guy in the other car turned out to be a HS kid.  He looked more shaken up than I was so my mother instincts kicked in, and I assured him we were totally fine and told him not to worry and that I knew he didn't mean to hit us. Megan said it was funny to look out the window and see me patting the arm of this grungy, scruffy, skater guy who was about 6'2".  He said this was his third thing this week. I'm not sure if he meant his third wreck or what, but I did notice the remains of one of those bright orange stickers on his window. 😓

I called the police, but they said that since no one was hurt, a police report wouldn't need to be filed and an officer didn't need to come out.  hmmmpf....then why are those guys always out there blocking the whole road every time there's a little fender bender before school?  The HS kid and I exchanged drivers licenses and insurance info and looked at the damage and both cars appeared drivable so I just took Megan to school and then drove home.  And honestly, if I hadn't been in jammie pants, I probably would have gone to run the rest of the millions of errands I had to do.  I came home to change and shower instead.

When I pulled into the garage, I noticed that both headrests were rattling and looked like they were broken which I thought was weird.  And then I went around to get my choir folders out of the trunk and realized the trunk wouldn't open.  Apparently he hit us harder than I thought. 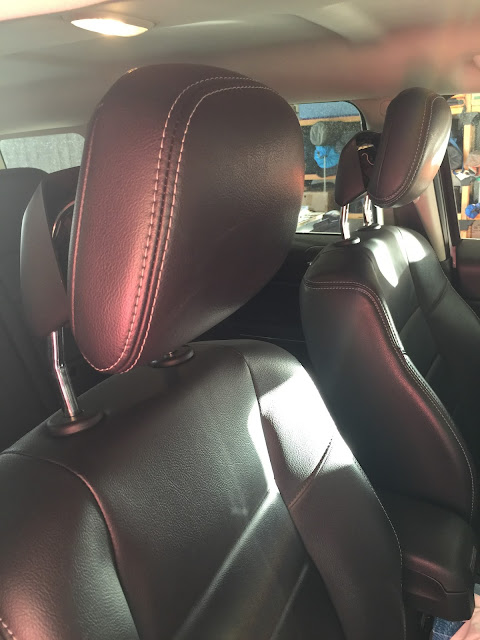 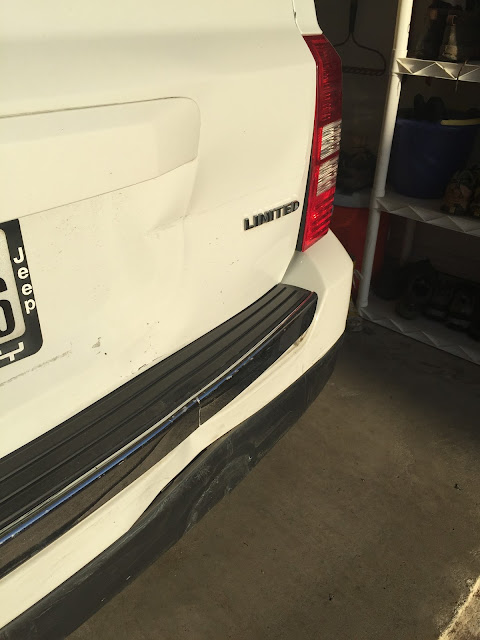 Craig called after I sent him the pictures and told me to go ahead and start calling the insurance company and get a claim going.  Blah...there's some kind of weird irony that I would be the one to have to call and talk to insurance companies and get claims going when Craig is the insurance expert in our house.  I was a little disgruntled about that for a good chunk of the day.

It turns out those headrest things were airbags which had deployed in the impact.  Who even knew there were airbags in the headrests?  And after two hours of back and forth phone calls to two different insurance companies, they told me to call Herb's Auto Body and to make an appt to get the Jeep in for an estimate.

When I called Herb's, the guy was totally swamped and said it would probably be Friday before they could see the Jeep and I was like, "that's fine, cuz it's drivable."  And he said, "OK well, tell me what the damage is so I can make some notes about what we're looking at."  And then I said, "well, the back bumper is crunched and the trunk won't open and the headrest airbags deployed."  And then the guy was like, "um...hang on a second" and he put me on hold for a couple of minutes. And when he came back he said, "ok I've just contacted our towing contractor and he'll be out there in 20 minutes to pick up your Jeep and bring it in," and I was like, "wait, what!?"

Apparently, if the airbags have deployed and the trunk doesn't open then technically it wouldn't pass an inspection and it can't legally be on the road, so it's not drivable.  But when the towing guy got here, he said that it's actually a pretty hazardous situation because once the airbag system has gone off, it has to be completely reset or the other airbags can just randomly deploy like whenever they want to.  He said it's a good thing the steering wheel one didn't decide to deploy on the drive home from the HS.  Ack... I guess it's also a good thing I was wearing jammies this morning. 😳 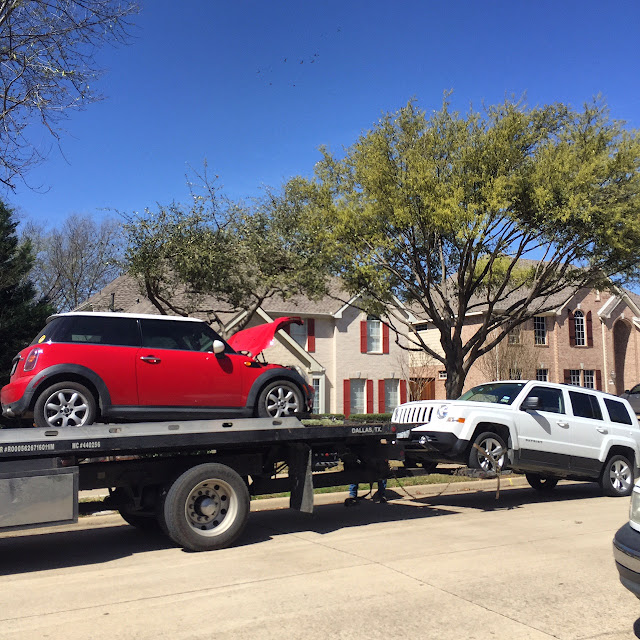 By 1:00 they had towed the Jeep to Herb's, I had gotten a ride from a friend to meet the car there and fill out the paperwork, and they had sent me to the rental car place (which is right there in the same building.) I'm now driving a Nissan Altima for the rest of the month.
The Herb's guy has been super nice.  He called Thursday afternoon to tell me they had looked at the car. And he was like, "Uh...that car took a really big hit, a lot bigger than it looks like from the outside. Are you sure no one inside was hurt?"  We weren't, but it was nice of him to ask.

The whole rear body panel and the lift gate (whatever those are) need to be replaced.  And also the airbag system had to be reset, but I think they already did that.

And I feel so bad for that poor HS kid. I'm sure he was thinking and probably telling his dad, "That lady was really nice and I saw her car. It looked fine. She drove away just fine."  And then that afternoon their insurance company is calling with a towing claim and a rental car claim and all this other stuff!

Blah...one little accident causes a whole lot of inconvenience, that's for sure.

And the craziest part is that I have lived with someone who eats, sleeps and breathes insurance for 22 years, and the one time when it would have been handy to have all that insurance knowledge available, it was in meetings in Orlando.

I'm grateful that no one was hurt, that I almost always wear jammie pants when driving to the HS in the mornings, that Megan wasn't driving the car, that I have three really good friends who were willing to drop everything and drive me around Allen, that the inconveniences of the day were relatively small ones, and that the insurance expert is now home and can take over all future claims handling on the Jeep.