First of all, Happy Easter!  I forgot to say that last week, so I'm saying it now!  If you haven't already, you should go watch the #hallelujah video the Church has put out for Easter!

And while you're at it watch the Hallelujah Chorus video too, cuz that's pretty cool!
I'm so grateful for the time that we have with these holidays like Christmas and Easter to celebrate the Savior!  And it gives us missionaries the perfect chance to quickly bring up Jesus Christ on the streets!  Don't forget the true meaning of these holidays.

Now I would like to talk a little about my fast from sarcasm.  As I mentioned last week, I started the 40-day fast challenge, and one of the things on my list to fast from is sarcasm!  It's hard.  Sarcasm is a giant part of my personality!  So this week I decided to type in the word "sarcasm" on gospel library and just see what came up. Well, I was shocked let me tell ya. "Sarcasm is the lowest form of humor," "the Greek root for sarcasm means 'to tear flesh like dogs'," "sarcasm damages relationships," etc.  Well, if that wasn't humbling I don't know what is!  So, as I continue to try and fast from sarcasm, I've realized that sarcasm is actually just a way to mask being rude and mean to others!  I have never really viewed it in that way, so I sincerely apologize to anyone that I threw under the bus in the name of a joke.  There are so many other ways to express yourself and to be funny, without being sarcastic!  But it's definitely still something I need a lot of practice at!

This week we went on tausch with the sisters in Wiener Neustadt, and I worked with Sister Lang!  She is really the sweetest, and just has such a positive attitude about everything!  As we were walking down the street one day I was complaining about how it's so hard to be exactly obedient sometimes because there are so many variables in life that change things!  And it's so hard to know when we should street contact, or door, or try calling people, because there are so many variables that affect when people would want to listen to us and when they wouldn't!  And then Sister Lang said something that totally opened my eyes and changed my attitude.  She said, "Yes there are SO MANY variables in life, but sometimes we forget who is in charge of all of those variables!"  #mindblown  I just kinda sat there letting that soak in for a second, and then I just thanked her so much for saying that to me! Even as missionaries, people who teach others about trusting in God and who have the Spirit with them so strongly every second of the day, we forget sometimes that every single variable in life is completely in the hands of our Heavenly Father.  So I will definitely be trusting Him more, and not complaining so much about the variables of life!

Sunday, Sister Fast and I were in charge of the lesson for Gospel Principles and it was about the Atonement.  One member brought four Persian friends to church, and that was so awesome!  We gave them Persian Books of Mormon, and then tried to start teaching in Danglish, because they spoke and understood a tiny bit of English and a tiny bit more of German!  At one point during the lesson I didn't know what to say, so I just started bearing my testimony about Jesus Christ.  I honestly can't even remember what I said, but I just know that the Spirit descended SO STRONGLY into that room.  I looked into the faces of the Persian friends and I just spoke the words that the Spirit told me to say.  I started crying, and I saw that one of the women was crying, too.  She could barely even understand me, but the language of the Holy Ghost is universal.  It was so powerful to me that she could feel exactly what I was feeling, and that even though she had no idea what was said, she was changed a little in that moment!  Seriously, if I don't see anyone get baptized throughout my whole mission, or if see no other success, I will KNOW that I have at least made a difference in that woman's life because I was able to follow a prompting from the Spirit.

Also, we met with our cute little investigator, Nadine, again and committed her to be baptized!!  She said yes before I could even finish stumbling over the baptismal commitment question in German. haha  She is so prepared and we love her so much!

Well, I haven't had the opportunity to watch the Women's Broadcast yet because everything is like a week behind here in Austria, but I am SO EXCITED for General Conference!!  I can't wait to hear from our Prophet and Apostles.  I would challenge all of you to really think about a question that you feel like you have been trying to get an answer to.  Think of something you can ask, and see the hand of the Lord answer that question for you through His servants!  Then, after conference don't just say "Well, that was a great spiritual high for two days!" and continue going through life. No! Change!  Let the words from Conference seep through you and let Elder Holland pound your heart with his meat tenderizer of a voice, and let it be softened and available for change.  That's the point of this life, change!  Start doing something different, stop doing something that doesn't have eternal importance, make goals, and new habits, and become a better, new and improved version of yourself! :)

I love you all!  Have a wonderful week! 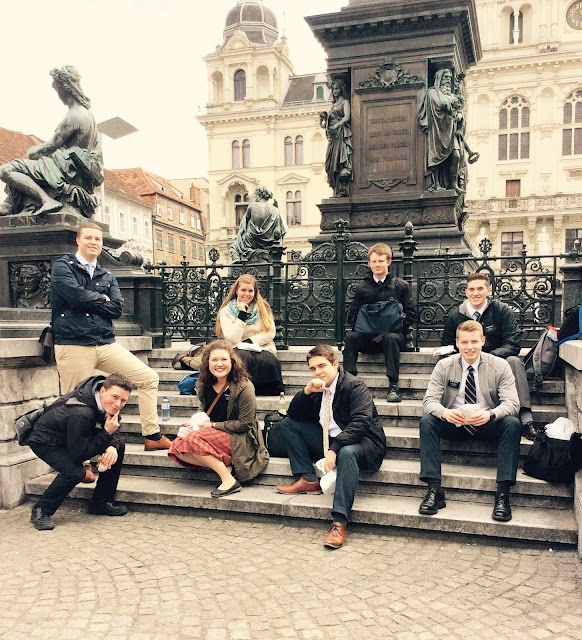