I can't remember if I mentioned the emergency New Beginnings we've been putting together this month?  (New Beginnings = a program held at the beginning of each year for the upcoming 12-year-old girls who will be entering YW to help them understand what to expect, to introduce them to the other girls and the YW leaders, and to explain the YW program, including stuff like the YW theme, the Personal Progress program, weekly activities, and Girls Camp.)

Cassie currently lives with her boyfriend and his two little boys and she smokes like a chimney, so there's apparently been some regression since she joined the church.  But, Angel is 11 and turns 12 next month and because they've not been to church in over a year, everyone had just sort of forgotten that she was an upcoming Beehive and didn't plan a New Beginnings last January at all.

Fast forward to August when YW finally got a fully functioning presidency and started looking at attendance rolls and stuff, and we realized we needed to to have New Beginnings for this little girl.  So we planned it for the last Wednesday of the month right before she turns 12 in September.  The missionaries visited her house to tell her about it.  The YW President called Cassie and invited both of them to come.  And the YW did all the rest of the planning and made decorations and stuff.

Last Sunday, Megan and Emma and I followed the missionaries over to Angel's house so we could meet her and hand deliver the little printed invitation we had made for her.  We also met Cassie for the first time and talked with her for a little while.  Angel is pretty quiet and very sweet, but no amount of explanation could make her understand why we were "making such a fuss" over her.   But she took the invitation anyway, and then the rest of us just hoped and prayed for the next three days that her mom would bring her.

This Wednesday was the day!  I printed out the programs and practiced the music for the special musical number the girls had worked on.  The whole YW Presidency got there early to decorate and set up the RS room.  The Bishop was there to speak and one of his counselors came with him.  Craig and the sister missionaries came to support everyone, but mostly me, I think, because I've been stressed out about this all week.  :)  The girls decorated the whole room with cute BEE themed things.  And then at 6:55, we were totally ready...but no Angel had arrived yet.  At 7:00...no Angel.  At 7:10...still no Angel.  I think we were all starting to wonder if we had assembled this event for nothing.

I had been thinking of a backup testimony/talk just in case she didn't show up to remind all of us that sometimes there are disappointments in life, and sometimes we can plan and plan and set up a beautiful, welcoming environment where the Spirit is, but we can't always count on people to come and receive it, and how no effort on behalf of someone's spiritual well-being is a waste...and blah, blah, blah...but my heart wasn't really in that talk and I really hoped I didn't have to give it.

At 7:17, just as I was getting antsy and looking at the Bishop to tell me when it was time to stop waiting and start conducting, THEY SHOWED UP!  Late, not in church clothes, and reeking of smoke, but who even cares!?  They came!  And that's all that mattered.  I almost cried.

So we went forward with the scheduled program instead of the alternate LIFE LESSONS one I had pulled together in my head when I thought all hope was lost.  And the whole thing was great!  Angel was super cute.  Her mom was chatty with all of us after the program was over.  And they stayed and mingled for a really long time.  (Refreshments always help with that sort of thing...) 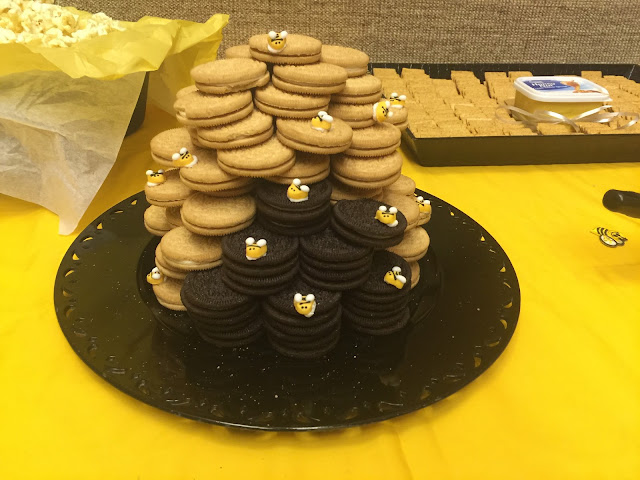 And all I kept thinking all night was how difficult this missionary thing must be for the full time missionaries...like my Savannah!  I went through every single emotion in my head while I was sitting there for 20 minutes waiting for Angel and Cassie to show up, wondering why Heavenly Father would have inspired us to do this, and then have us plan this whole thing and go to all this effort if they weren't even going to come?  And THEN, even after they got there, I spent the majority of the program wondering if it was sinking in, if they felt the Spirit, if the girls and the leaders were saying the right things, if we had picked the right song, if they were allergic to any of the food we prepared.  Sheesh!  So much to worry about!!

Cassie apparently said that she loves the message of the church, and she always loves the words and the feelings she feels when she comes, but she just wishes it were a little more contemporary and not so...reserved.  She asked the Bishop if he could add a later service with some peppy music for the younger, more contemporary crowd.  He said no.

So who even knows what, if anything, will happen?...even after all that effort and all that worrying, guess what?  I still don't know if they'll ever come to church again.  I don't know what they thought or felt.  I don't know if it was enough.  Blah...I hate not knowing stuff.

But that's the whole point, right?  We do what the Lord asks us to do and then we let it go and trust Him to do what He's going to do with it.  Whatever that may be...

This missionary work is hard stuff!

But I'm so super proud of the girls for doing such an amazing job of planning and collectively hoping and praying, and then welcoming the heck out of this little girl.  Hopefully Angel felt all that love in the room.