Well, I've been telling myself for over a month now that I needed to get back into a regular temple schedule. The Birmingham Temple is tiny, though, and only has limited sessions each week, so I looked up the temple schedule and decided I would make Wednesdays my new temple day. My neighbor, Gretchen and I sort of talked about going together but I really prefer going to the temple by myself, especially the first few times, so I haven't pursued that much with her.  Yesterday, I felt like this would be a really good Wednesday to start my new schedule. I was super excited and energized about it yesterday when that thought came, but this morning when I realized this was first day in a LOT of days that I would have the whole house to myself (no missionaries, no Craig working from home, no kids, no appliance repairmen or delivery people to wait for...) I almost talked myself into staying home.  That would have been a whole lot easier.  But I didn't.

And then, while I was getting ready this morning, I specifically heard that familiar little voice in my head say, "You need to do an actual session today and not just initiatories because you need to hear the words in the endowment."

So I found my tiny pile of names that were ready for endowments and I left the other GIANT pile of pink cards that still needs initiatories laying on the bed. I made sure I had everything in my temple bag, grabbed my keys, and my camera at the last second and made it out the door right on time at 9:45 (like Craig had advised this morning before he left for work.)  It takes about 45 minutes for normal people to get to the temple, probably slightly longer for me, so that would have given me plenty of time to get there, park, and change before the 11:00 session.

I've been to this temple three times. Once with Craig and twice driving by myself without him. So I sort of knew which way I was going and what to expect.  But I put the address into the Jeep's GPS just to make sure because I never trust myself with directions. It directed me to the first freeway and then told me to get off at the first exit. Um...that totally wasn't right.  The only way I've ever been to the temple is ALL freeway.  First, the one by our house and then another one for a little while and then the long one directly to the temple exit.  I didn't know where the heck the GPS was taking me, but because I'm a dumb sheep when I'm driving, I just followed it. 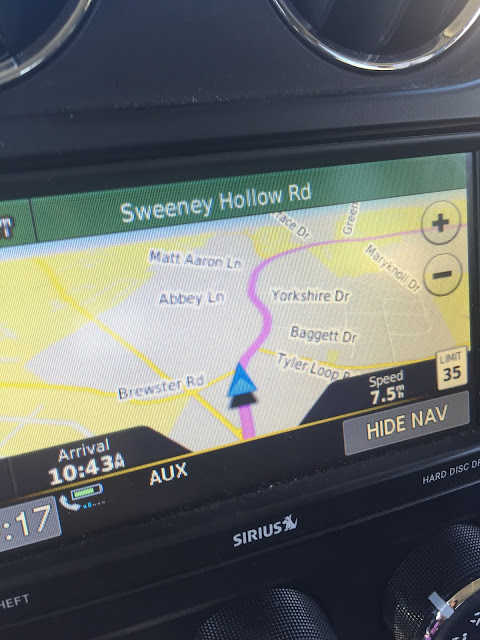 About five miles down Sweeney Todd road (or something like that) I texted Craig and asked him, "Where in the heck is this GPS taking me?" He said it was probably a back way and yay for me that I would get to explore a new way to get to the temple. 😕

And then there were all these road construction guys and a giant sign... 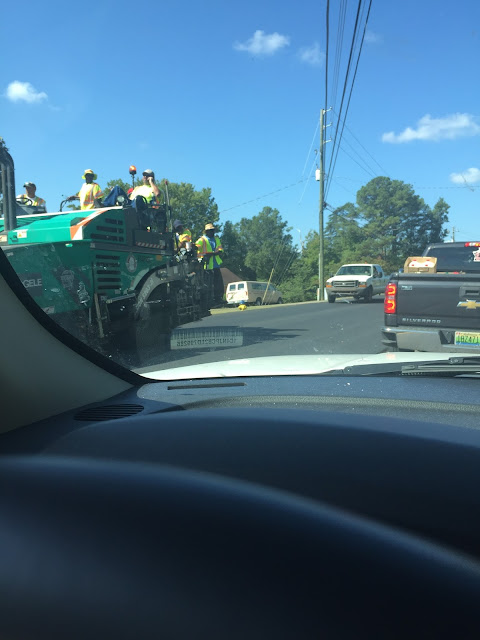 ...and the long line of traffic waiting for a tiny little man in an orange vest to move out of the way.

...and the truck with 500 gallons of milk baking in the sun. 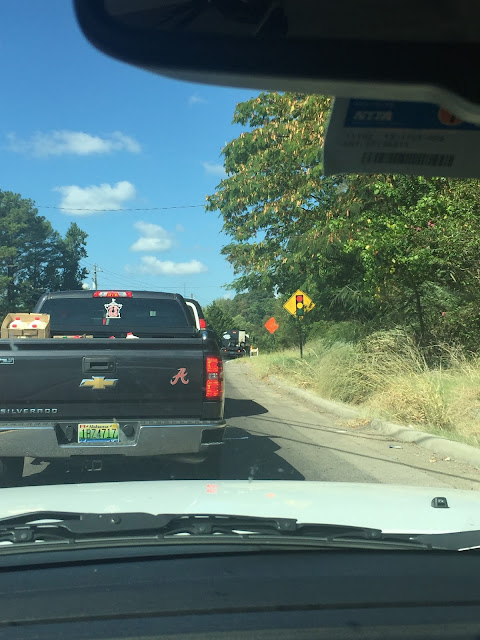 
I mostly cried for at least 15 of those 20 minutes because all I wanted to do today was go to the temple.  So why in the heck wasn't I getting to do that?  Why is everything I want to do so darn hard?  Why can I never go someplace without getting lost? 😡😓🙄💦

And then finally the little orange man moved and we could drive again...more Sweeney Todd road winding and winding through beautiful Alabama to who-in-the-heck-knows-where.
25 minutes later, I did actually pull into the temple parking lot at exactly 10:57am (so the GPS was correct, just creative with its choice of routes today, I guess.)  I'm pretty speedy changing into my temple clothes, but not that speedy!  I didn't even try to make the session. For a minute I thought about just doing initiatories, but then I realized I had left all those cards on my bed and couldn't do those either. 😓

Instead I drove to the far end of the parking lot, cried again for a minute or two, took a couple of pictures of the temple, and then listened to today's Book of Mormon chapters for Grandma's Challenge. I'm on 2 Ne 15-16...the Isaiah chapters. 😕

Then I said a prayer and apologized to Heavenly Father for being a dumb sheep and not having any sense of direction. And prayed that I would learn whatever I was supposed to learn from this frustrating experience.  And I committed to trying again next week.

And now I'm just waiting...for what exactly, I'm not really sure.

What I thought this day would look like hasn't happened...not the disappointing morning I've been dreading all week.  ...not the enlightened and uplifting afternoon I expected either, though.

Maybe this is a sign that I need to pursue that Wednesday temple date with Gretchen?  Maybe I need to start the temple trek earlier in the event of future construction?  Maybe I need to always carry every kind of temple card with me just in case?  Maybe I need to trust my instincts more and turn around before I get five miles down Sweeney Todd road the next time?  Or maybe I just need to give myself credit for a valiant effort and calm down?

I bet Heavenly Father would pick that last one. 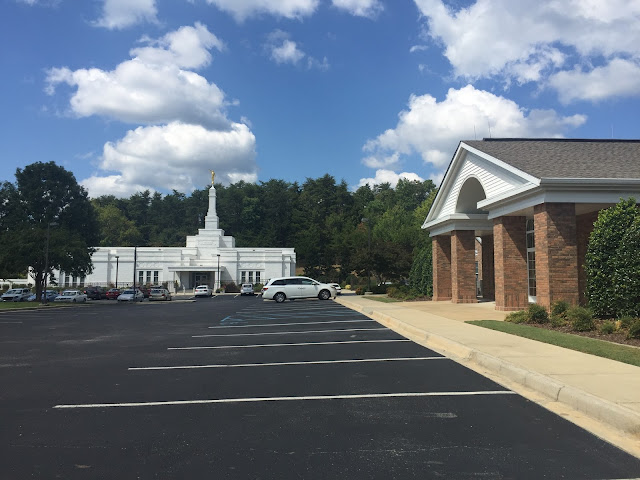