Whelp I jinxed it. I fell off my bike this week, right into the middle of the street!  Thankfully I didn't get run over, but my watch got destroyed so there goes my tan line, I guess. It's okay, this week I'm working on getting a CTR shield tan line on my finger instead 🛡 it'll be so much cooler.


So we pretty much dropped ALL of our investigators this week, but amazingly the work has actually picked up!  Because we dropped everyone that's not really progressing, we had time to visit the 3 or so that are and we taught more lessons than we ever have this week!
One of the investigators that we considered dropping was Janet, but we had a return appointment with her on Friday.  We decided that if she didn't answer the door on Friday for our appointment then we would drop her.  We went to her apartment on Friday and knocked the standard 3 times. We waited for a couple minutes and no one answered. We were about to leave the complex but because we had just biked a TON to get there we decided to sit on the stairs for a second to take a break and contact some people. We sent one text and all of a sudden Janet came walking up!  She had just gotten back from picking her daughter up from school and invited us in even though she didn't have a ton of time.  Our lesson with her was short but went SO well, and she gave us watermelon after!! 🍉
Backtracking a little bit here but on Thursday WE WENT TO THE TEMPLE!!!! It was so amazing, I've missed it so much!! And the Houston temple is BEAUTIFUL. I'm so grateful to the member that drove us (even though we almost died multiple times), she even took all of our district out for tacos after! 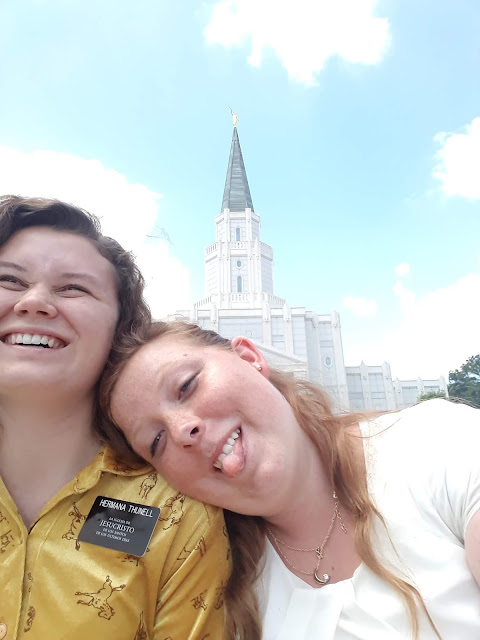 This week has been a really interesting one. Lots of ups and downs as always. Of course dropping people was a bummer, but our zone has had so many baptisms this week! I'm confident that Hna Hill and I are getting closer to contributing to that.

My district leader seems to know exactly how to push me out of my comfort zone, because he keeps giving me assignments that I don't like: leading the music at a baptism, giving the closing prayer at said baptism, giving the discussion at district council (that's all in Spanish by the way), he even volunteered Hna Hill and I to speak in sacrament meeting on Sunday. Saturday night came around and neither of us had written our talks yet, so we tried calling a member of the bishopric to see if we could do a musical number instead of speaking. Well that backfired because then he asked us if we could do both 🤦‍♀️ it all worked out though.  I did A LOT of praying, we wiggled our way out of the musical number, and Heavenly Father helped me pull my talk together just in time. As in I finished writing the last word literally 2 seconds before I got up to speak.

Bonuses of being Spanish speaking missionaries: we came across this guy Faisal this past week, who seemed super cool and interested, but also seemed like he just wanted to bash us. In the middle of our first lesson with him he called his friend and asked him to come over to talk to "those christianaries". We skedaddled around that time-mostly because it was 8 at night and it takes us about an hour to bike home-and then we referred him to the English elders, who gladly taught him. Apparently it went well because Faisal texted us last night and thanked us for sending more missionaries his way. We come across a lot of creepy dudes around here, but I'm super grateful that the elders are always willing to take them off our hands.

I'm so grateful for the tender mercies and miracles we've seen this week. There have been SO many, and they all stem from us following promptings from the Holy Ghost (well mostly Hna Hill following promptings and me following her). I can't even explain how cool it is to look back on our week and realize that all the little decisions we made during the day were directed by the hand of God. I really do feel like I'm becoming a tool in His hands.

I also LOVE biking 😄🚴‍♀️ just thought y'all should know.