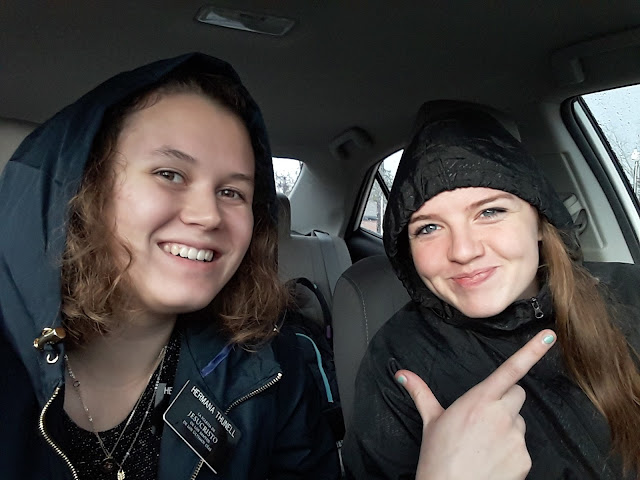 As missionaries, our job is pretty much to annoy people until they finally give in and listen to us. Just kidding, but that's what it felt like this week as we got to see some of our persistence finally pay off.

I'm not really big on second chances, and when people ignore us for three weeks straight my first instinct is definitely to stop trying, but last week while we were knocking we accidentally knocked on a member from the English ward's house. They let us in and gave us cookies and hot chocolate, and told us their conversion stories. Essentially, the wife was converted by persistence, because her home teachers would NOT leave her alone (her words). As she told us her story I immediately thought of all the people we've been trying to get a hold of but couldn't, and I decided that this week I wanted to make more of an effort to knock on their doors, rather than just call or send a text.

So on a whim one night we stopped by the house of one of our referrals. The one that's been ignoring us for 3 weeks. She pulled into her driveway about 30 seconds after we parked in front of her house and we made some calls to give her a chance to get inside before we spiritually assaulted her.

When we finished our calls we got out of the car and she was walking out her door. She told us that she had been avoiding us but when she pulled into her driveway and saw us sitting across the street she knew we were there for her, even though she's never met us before. She told us she admired our persistence and that she was ready to hear our message because it must be important (it is).

We taught her the Restoration and she promised us she'd pray about it because she believes God sent us to her for a reason. The next day we called her to check how her prayer went and she didn't answer. We continued to call her every hour after that, afraid she was avoiding us again. Finally she answered at the end of the day and said she hadn't received an answer to her prayer yet so she started reading the Book of Mormon to help her figure things out!

On Sunday we invited her to come to church but when we called her she didn't answer so we figured she wouldn't come. Five minutes before sacrament ended she showed up with one of her friends! She told us she couldn't find the address of the church and she tried calling us three times but we didn't answer. So she looked up the address online and came for the last two hours anyway!

Persistence, everyone. When you put effort into people, they put effort into listening to your message and acting on the word. And that was just one example.
This week has been crazy. On Tuesday we got snowed in, but Hermana Bent and I got picked up by a member of the English ward and we did service for them all day. I now know the ins and outs of putting on doorknobs. We also watched President Nelson's broadcast and that was awesome! My favorite part was when he said "We're going to begin with the end in mind", because that's the THSM motto! So pretty much it's been confirmed by the prophet that our mission is the best!👍😄  I'm glad to be serving in the best mission in the world! Sorry to all my other missionary friends who don't have the same opportunity.

But persistence!  I may not be one to give second chances, but God is. He gives second chances and third chances and two thousandth chances, because He wants us all to have the opportunity to hear His word and return to live with him again. So while I'm out here I just need to forget myself and the amount of chances I think people deserve. My job as a missionary is to be that second or third or two thousandth chance.

Thanks everyone for all the emails! I love you all!