Holy poop! so much has happened this week I can't even think!

First things first, it's not winter anymore!!  It's spring!  It has rained almost every single day this week.  So crazy! 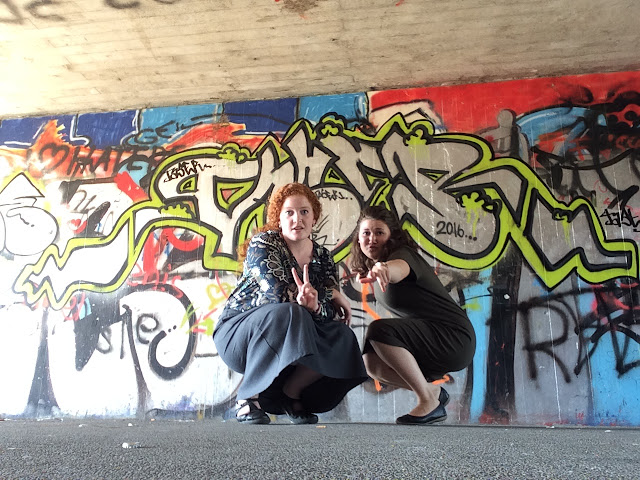 So to start the week out, Tuesday we had district meeting and then we traveled to Munich for tausch!  I came back to Augsburg with Sister Pugh, who is such an awesome ball full of energy!  We went to a family's house for dinner, and they're from England, so yay we got to speak English!!  It was super fun, and for some reason we got onto the topic of my Hawaiian heritage, and then I told them all of the random stories that I knew, and they thought it was so cool!  On our way back home, Sister Pugh and I found some half wild reindeer, and I guess she's an animal whisperer or something because she had them eating out of her hand in like five seconds! 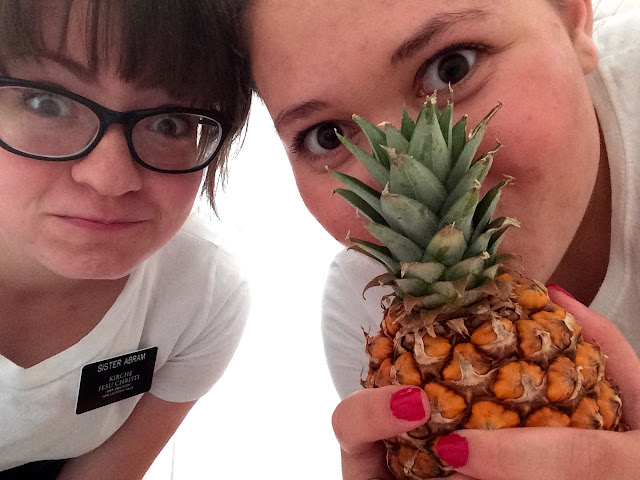 Wednesday we had a super awkward service project at a less-active's house, and then we had an appointment with a cute old lady in our ward :)  She taught us how to French braid the "real French" way.  Still don't know what that means.  Then we went back to Munich to switch back, and Sister Abram and I were reunited!  I think I've gotten super attached to her, because I missed her SO much!  That night we had an appointment with Familie Kern, we ate dinner, played soccer, played with some cute fluffy bunnies, almost had a water fight (that has been rescheduled for tonight) and then we had a dessert competition!  Their family made a dessert, and we made one, and I literally felt like I was in an iron chef competition! So intense!  They made pineapple-caramel ice cream, and we made Frozen Christmas mixed with berries (it was weird but we were just working with what we had) and luckily we tied! Super fun :)

Thursday we did a lot of area book work!  This is seriously taking forever.  We have to type everything from the papers in our apartment into our iPads, and because of the European privacy laws we have to be extremely vague and change almost everything, and because it's just a test run for European missions right now, there are so many bugs and problems with the app!  But at least I don't have to wear a skirt when we are just sitting at home typing stuff :)
After our area book stuff we went to a really depressing appointment with an older lady, and then we went dooring for a little bit!  BEST DAY DOORING EVER. SOME RANDOM GIRL GAVE US CUCUMBERS! 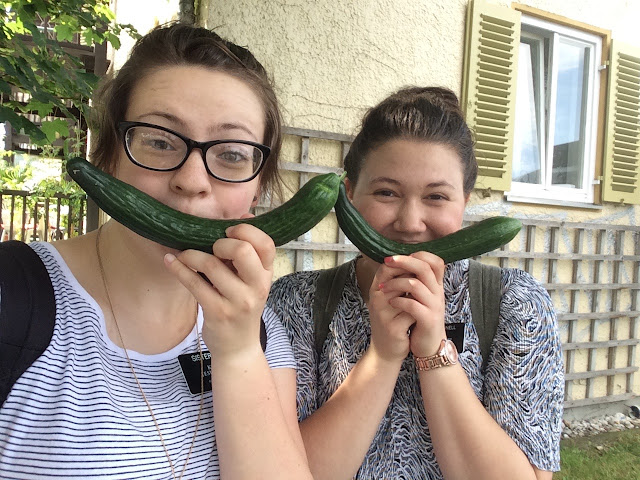 We knocked on her door, she said she was interested, took a Book of Mormon, said she would try to come to church sometime soon, also gave us a referral (her mom) who would also be interested, and then she ran into her kitchen and came back with two cucumbers for us because we are "schöne mädchen"  (beautiful girls) #yes.  We popped our cucumbers into our backpacks, doored a little more, and then went to yet another old lady's house for another appointment!  There are a lot of old ladies we visit here haha.  Frau Mügel is 97, and technically our investigator, but we are just preparing her for the next life because she probably won't be able to get baptized in this life. She is so lovely, and still very lively!  We watched some Jesus videos with her, and then she started showering Sister Abram and I with gifts (this is a usual thing here in Augsburg.) We got watches, bracelets, necklaces, and she gave both of us like engagement rings!  I was scared she was just giving away her heritage there because they were ECHT fancy rings!! But no matter how much we protested she made us keep them!

Friday was full of studying and planning, and then we had a dinner appointment with a lady in our ward who has literally travelled everywhere! She showed us all her photo albums of all her trips to Greece, and Thailand, etc. and holy cow my travel bug has turned into a travel parasite!!  I just want to travel the world!! So yeah, had to pray really hard that night to get over my trunkiness.

Saturday was our ward Sommerfest! We went to Kuhsee (Cow Lake) and had a BBQ and played with all the kids and talked to a lot of members and non members :) it was great! Then we came home for the rest of the day to do studies and area book work.

SUNDAY WAS AWESOME. We had our investigator, Herr Mach, come to church for the first time and he loved it!!  And a he brought a friend, who is now our new investigator :)  We are visiting with him this coming Friday and he's making us fufu, so I'm a little scared!!  After church we went to Markus and Alexa's, just the greatest members here in Augsburg, and they literally live in a haunted mansion. Cold, dark, weird smelling, cobwebs and all!  After we ate and visited a little, they took us church hopping, and we got to see some pretty cool churches :)  Europe has such old, and beautiful history!  It's awesome!  Today for pday we were planning on renting bikes and doing some more church hopping, but that didn't work out so we spontaneously decided to go to the zoo!  Best. Decision. Ever.  I loooove the zooooo! All the cute little animals! It was a fun day :) 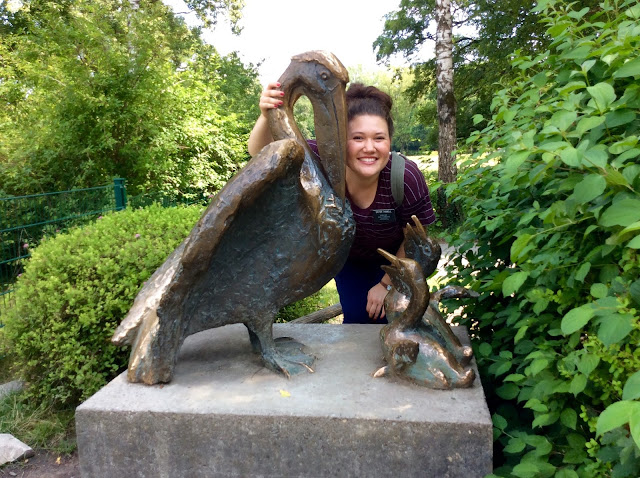 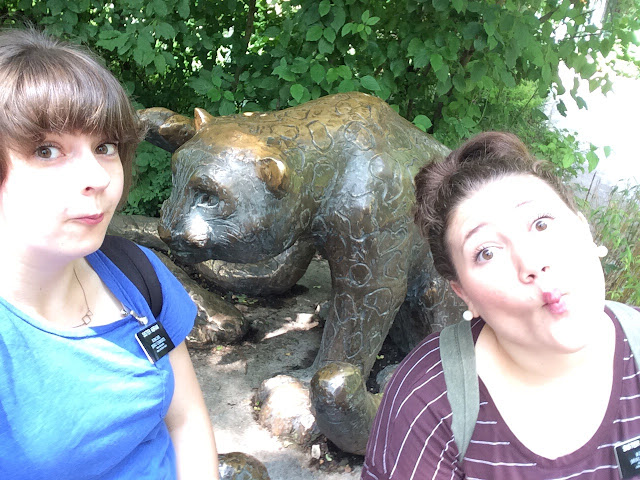 Many of you have heard about the scary things that happened in Munich this weekend. Luckily we live about 45 minutes away from Munich, and all the missionaries in the city are safe, but it was still a super scary weekend!  I would ask you to please keep the families of those who were killed in your prayers, because it's just such a tragedy.  On Friday night, while I was having a little panic attack, I asked myself why things like this are happening! And more and more frequently!  Europe is a scary place right now, and so is the rest of the world!  Well, the thought came to me of the joy that the Nephites had when Christ visited them in the Americas.  And then I thought of the horror and terror they had to face before that could happen.  And then I thought of the joy we will all feel when Christ comes to the earth again, and all the things that have to happen first before that prophecy can be fulfilled! Wars, rumors of wars, bloodshed, tears, nations against nations, destruction upon the whole face of the earth. These are troubling times, but ITS BECAUSE WE ARE GETTING CLOSER AND CLOSER TO THE SECOND COMING. HOW EXCITING IS THAT!  Bad things have to happen first, but we can have the peace and confidence in the fact that we have the gospel :)  We know who we are, why we are here, where we are going, and that's more than a lot of people. The next step is to share it with others so they can feel the same!! Which brings me to my next point... MEMBER MISSIONARY WORK. I cannot stress this enough, people. I am not just part of a throng of missionaries in some random place in the world, and you are not just someone who is allowed to sit and read (or skim, or not read) my emails, and think about those random missionaries and go to their farewells and homecomings, and be happy for them. That stuff is good.  BUT MISSIONARY WORK IS BETTER. You don't have to have a name tag to do it. Share what you believe online, tell people what you did over the weekend (*cough *cough um CHURCH???), be an example of a disciple of Christ, just do the small and simple things!  One sign of true conversion is wanting to share the gospel, so start converting yourself and start sharing the gospel!  Make a goal, set a date, give a Book of Mormon away, make new friends, talk about the gospel, invite people to church. There is so much you can and should do. It makes our job out here so much easier, you don't even know!!  Missionary work isn't just tracting :) it's just being a normal friendly Mormon, that's all :)
I love you all, and wish you the best week ever!
Liebe Grüße,
Sister Thunell